Eutrophication of lakes and estuaries due to the level of nitrogen (N) and phosphorus (P) in wastewater effluent discharges are a significant concern.

Many jurisdictional regulators are evaluating these effects and subsequently, reducing the allowable levels of N and P in wastewater discharges.

As a result, an increasing number of Biological Nutrient Removal (BNR) systems are being deployed at wastewater treatment plants (WWTPs). When a system is designed to remove nutrients (above the assimilative capacity of microorganisms), it is referred to as BNR.

To facilitate the removal of both N and P in BNR systems, an organic source of carbon is required. The carbon must be provided in optimum quantities and have the appropriate microorganisms to maximize efficient removal. However, most WWTPs do not have sufficient, organic carbon in their incoming wastewater so a consistent, supplemental source of carbon is required to ensure reliable performance.

Traditionally, carbon-rich chemicals such as methanol, glycerol or acetic acid have been utilized. However, these chemicals are expensive, adding significant, operational costs to BNR systems. Methanol is often the more cost effective additive, but there are considerable safety issues with it due to toxicity and flammability.

Lystek processed biosolids or LysteCarb typically contains 40-50% soluble chemical oxygen demand (SCOD) of total chemical oxygen demand (TCOD). Total COD in LysteCarb ranges from 105,000 mg/L to 150,000 mg/L, depending on variables in the solids source within a WWTP or from one plant to another. Also, concentrations of volatile fatty acids (VFA) concentrations in LysteCarb are generally in the range of 10,000 – 15,000 mg/L.

Therefore, LysteCarb can provide a highly cost effective, alternative source of readily available, organic carbon for denitrification and Enhanced Biological Phosphorus Removal (EBPR). Not only does LysteCarb contain a much higher COD: N: P ratio than raw wastewater, but the material is also much higher in concentrations of readily biodegradable COD (rbCOD). When recycled in BNR systems, LysteCarb enhances denitrification and biological phosphorus removal while improving the overall performance of the BNR system. 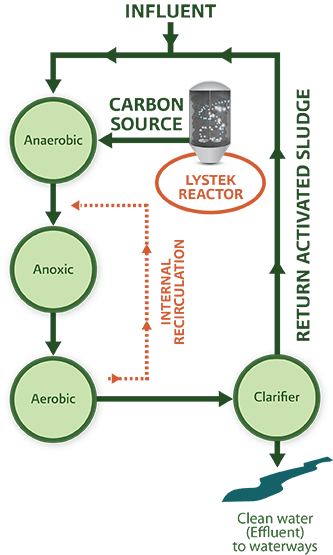