While wastewater treatment plants and soils are very different systems, both have microbial populations which break down organic materials and convert nutrients in solution into more stable forms. While they exist in different environments and perform different functions, all microbial populations require a readily available food source to perform optimally.

You might have heard that there are more organisms in a teaspoon of soil than people on earth, but did you know what those billions of microbes do? Soil microbes help in decomposition and nutrient cycling. Recent studies have also shown that soil microbes play a far greater role in building soil organic matter than previously thought1,2. While it has been long understood that microbes play a role in building organic matter, the conventional thinking was that soil organic matter formation was driven, for the most part, by plant inputs. Some plant compounds, such as lignin and long-chain lipids, are difficult to degrade, and it was believed that these compounds were the primary components of stable organic matter. Scientists are now confirming that microbes play a larger role than once thought in building the kind of organic matter that is resistant to degradation. This stable, or recalcitrant organic matter, is important in building soil physical properties and long-term soil carbon sequestration (see our previous blog post about soil carbon sequestration).

A study by Kallenbach and colleagues, published in Nature Communications in 2016, provided the first direct evidence that soil microbes can synthesize complex stable organic matter from simple carbon compounds such as glucose. Researchers created a synthetic soil with no microbes and no carbon, and then added a natural soil microbial community. Each week, they fed the microbes with different types of carbon containing compounds. The synthetic soils were incubated for a period of 18 months total, and over time, began to resemble natural soil (as seen in Figure 1). When the organic matter was chemically analyzed, the researchers observed that the microbial communities had synthesized a diverse array of compounds, and that 40% of compounds were chemically stable to oxidation, which is within the upper range for natural soils. Overall, the results of this study demonstrate the critical role of microbes in building stable organic matter and emphasizes the need to better understand how management practices can enhance soil microbial life to help build healthier soil.

Figure 1. Images of sugar-treated model soils over time, showing the development of soil aggregates. The far left panel is an un-inoculated sterile kaolinite and sand mixture, and the far right panel is the same mixture, inoculated and treated with weekly glucose additions for 15 months (Kallenbach et al., 2016).

Organic matter content is considered the most important measurement of soil health. It contributes to improved physical structure of the soil, feeds soil biology, provides a source of slow-release nutrients and sequesters carbon. A previous blog post, “Biosolids and Soil Health” discussed the increasing interest in the agricultural community in building soil health, and its importance to agricultural sustainability. Biosolids and other organic amendments can be used as part of a strategy to improve organic matter, and therefore soil health. Organic amendments contain a variety of organic compounds, some of which are stable, and will last in the soil for a long time, and others which will be degraded quickly. Some microbes specialize in degrading certain kinds of compounds, while others are opportunists, and are able to use whatever is available3. The results of the aforementioned studies suggest that an additional benefit of adding organic amendments to soil is the addition of readily available carbon sources or “food” for the existing microbial communities to build stable organic matter.

LysteGro®, Lystek’s biofertilizer product which is derived from biosolids and other organic wastes (i.e. food waste), is a source of nitrogen, phosphorus, potassium, sulfur and a suite of micronutrients as well as organic matter and carbon. During the Lystek process, the organic matter in the biosolids feedstock is broken down through a process called thermal alkaline hydrolysis. The Lystek hydrolysis process (Lystek THP®) involves adding heat (75oC or 167oF) and an alkali source (to adjust the pH of the material to approximately 9.5) as well as physical shearing which lyses cell walls and breaks down many larger molecules (protein, lipids, carbohydrates) into smaller molecules that are easier to biodegrade. Figure 2 is an image from a scanning electron microscope (SEM), which shows biosolids before (left) and after (right) Lystek treatment. After the Lystek treatment, many of the cell structures have been degraded, and larger compounds are broken down. The resulting material is a high-solids homogenous liquid, with primarily easily digestible compounds, along with some recalcitrant organic compounds.

Because the post-hydrolysis material from the Lystek system contains more readily available carbon sources this material can be recycled back to two areas of a wastewater treatment plants to make use of the easily bioavailable and biodegradable material, specifically:

In a similar sense, because LysteGro (Lystek’s biofertilizer product) has been hydrolyzed, there is more easily digestible organic carbon than if the material had not been processed. When added to soil this will provide the existing soil microbes with a more readily available food source to help improve their functionality and ability to generate stable organic matter that will have positive impacts on the soil and associated crops for several years. Using LysteGro along with other management practices, such as reduced tillage, cover crops and maintaining crop residue, can help to foster soil microbial life, which provide numerous benefits to the long-term health of the soil. 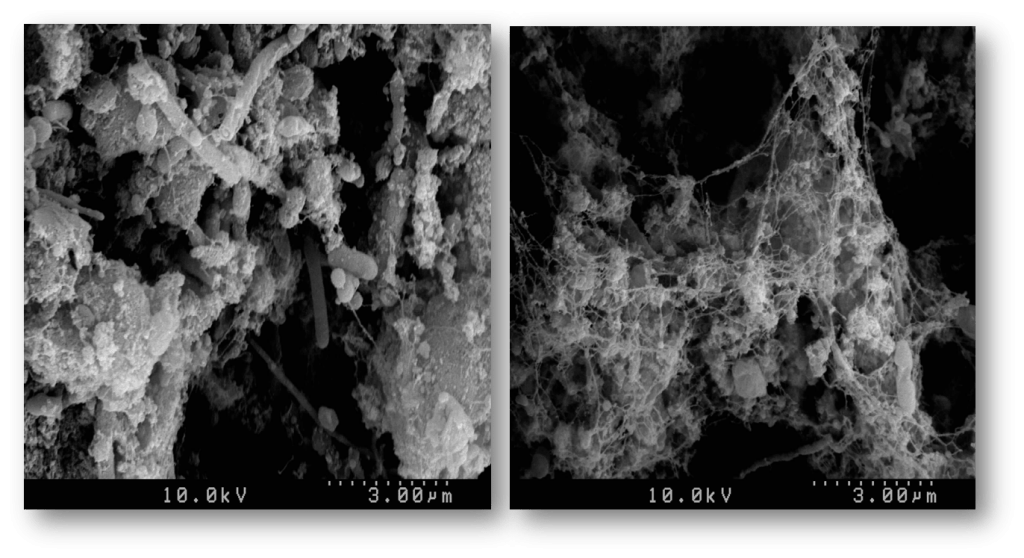 8 Ways Biosolids & Organics Can Contribute to a Healthier Environment